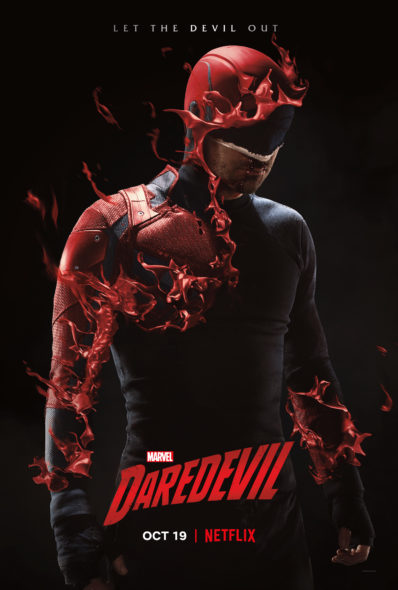 As we first learned in November, Netflix has cancelled Marevel’s Daredevil TV show. A couple of weeks prior to that news, executive producer Erik Oleson announced he had pitched Daredevil season four to Netflix, but struck out. Now, we’re learning that Netflix decided to pass on a fourth season featuring the Man Without Fear, despite high viewer demand for the series.

That’s evident in the latest numbers from Parrot Analytics which reveal that Daredevil ranked fourth last week in viewer demand among all digital originals in the U.S. across all streaming platforms.

Demand for the sightless superhero series was surpassed only by three shows (Narcos, The Chilling Adventures of Sabrina and Stranger Things, all from Netflix) during the week ending December 1, the chart shows. The chart measures “desire, engagement and viewership” with weighted values that, for example, give heft to the total “likes” a show accumulates but give greater heft to the total number of actual viewings.

Season 3 of Daredevil was released in October to upbeat reviews  but the critical judgments being made at Netflix were more about corporate realities than creative achievements.

While Netflix ponied up for production costs for the Marvel shows, the streaming service had zero ownership stake in the IP. That limited upside was acceptable until Marvel’s parent, Disney, announced next year’s launch of Disney+, a direct rival to Netflix that will have Marvel Studios content as a flagship in its formidable armada.

Disney will also be withdrawing its past and present content from Netflix in the months ahead. That effectively reduced the Marvel shows on Netflix to the corporate equivalent of refugees.

Marvel has indicated we haven’t seen the last of Matt Murdoch, despite the Netflix cancellation. When we know more, you will too.

What do you think? Are you a fan of Marvel’s Daredevil TV series? Should it have been cancelled or renewed for a fourth season on Netflix? Sound off in the comments.